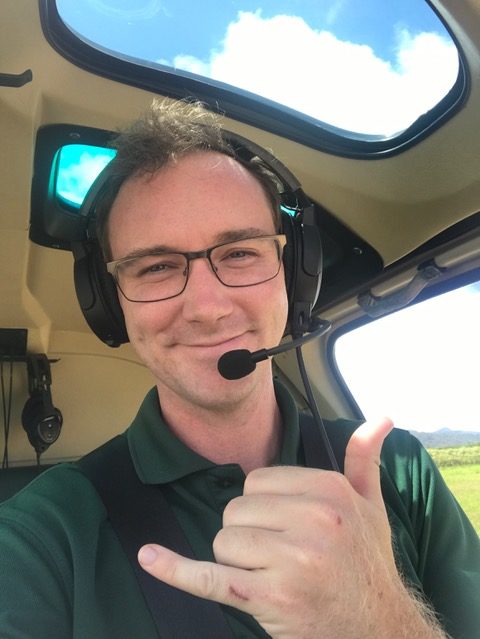 Aloha!  After growing up in a small ski  resort town in Montana, I took a shot-in-the-dark and moved to Hawaii with little more than a suitcase.  Through hard work and a little luck, I was able to secure a job at a private resort on Hawaii Island in which I got to “talk story” with A-list celebrities and billionaire titans of industry.  After I had made my dream of living in Hawaii come true, I decided to set my sights a little higher— literally!  On my first helicopter intro flight, I saw a tiger shark and a humpback whale- needless to say I was sold on a career as a professional pilot.  Hour by hour, I have plugged my way through being a student pilot, private pilot, commercial pilot, flight instructor, tour pilot, check airman, and now chief pilot of Safari Helicopters.

So, what started as a six-month attempt to give the island life a try has evolved into a decade-long Hawaiian adventure.  Ask me about the night dive when a one-ton giant of the abyss known as “Big Bertha” swallowed my head!  So far the highlights of my career have been piloting for the Travel Channel, being the film crew pilot for the Ironman World Championships, and having a “front-row” view of the raw destructive power of Kilauea Volcano- particularly during the infamous 2018 eruption.  My favorite part about flying in Kauai is getting people to the spots that are otherwise completely inaccessible.  I also love passing on the knowledge I have gained to new pilots that I train to live the dream of flying helicopters in Hawaii for Safari Helicopters!